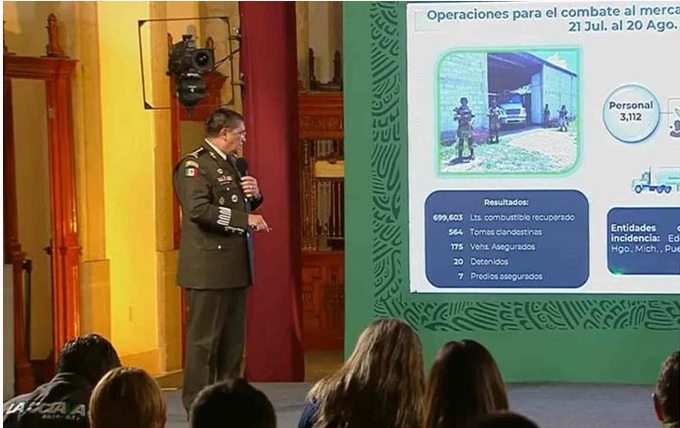 PACHUCA.- Hidalgo is one of the states with the highest incidence of hydrocarbon theft in Mexico, reported Luis Cresencio Sandoval, head of the Ministry of National Defense ( Sedena ).

This was announced during the early – morning conference on Friday, which presented safety reports in Mexico, including that of “Operations to combat the illicit fuel market from July 21 to August 20 “.

In that period, agents of the Sedena recovered 699 thousand 603 liters of stolen fuel from pipelines of Petróleos Mexicanos ( Pemex ); they insured 175 vehicles and seven properties. In addition, they arrested 20 suspects.

From July 21 to August 20, 564 clandestine seizures were detected throughout the country, being the State of Mexico, Guanajuato, Hidalgo, Michoacán, Puebla, and Tamaulipas the states with the highest incidence in this crime of the federal jurisdiction, but the details were not detailed. numbers from each state.

Among the states with the highest number of clandestine seizures are: the State of Mexico, Guanajuato, Hidalgo, Michoacán, Puebla, and Tamaulipas, “said the Secretary of National Defense.

3,112 members of the Sedena participated in these actions. And in the transport plan to support Pemex, 170 million liters of fuel were transported on 13 supply routes with 637 tank trucks.