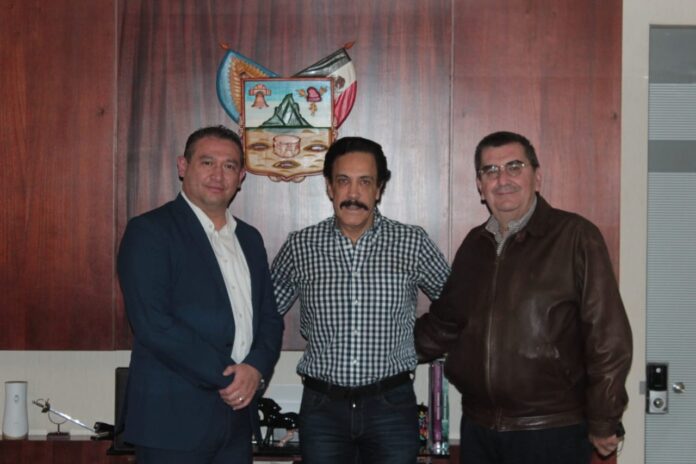 The Mexican engineer at NASA, Luis Velasco Velasquez visited the state and during his tour of the entity, he said: “Because of the complete ecosystem and infrastructure being created in Hidalgo, Governor Omar Fayyad’s commitment is one that other countries and governments must fulfill. The time is now, the time is right.”

After speaking in front of more than 400 young people and touring the education district, Health, science, technology, and innovation, Next to Science and Technology Park in Hidalgo, Luis Velasco Velasquez met with Governor Omar Fayyad Mensis. During their meeting, they exchanged views on the actions that President Hidalgo is promoting in terms of scientific diplomacy.

The Mexican engineer, who took part in the NASA mission that put the Perseverance rover on Mars, said he had the opportunity to see the various strategies and commitment the government is making to science and technology in the state, for which he congratulated the governor and his entire team.

“Today I invite all Hidalguenses to join in the commitment and action for science and technology, and I firmly believe that the time has come to make these commitments in the space sector to raise the name of our country,” Happy Velasco Velasquez.

During Luis Velasco’s presentation of the “Uber Perseverance Rover Made by a Mexican” talk implemented through the initiative Sitnova talks. And Laman Carranza Ramirez, Head of the Planning and Foresight Unit, welcomed his presence and described what the engineer shared about what is happening in space as very interesting and highly impactful.

At the end of the show, Carranza Ramirez stated: “Thank you for being at Hidalgo and affirming our conviction to think big, pass it on to our youth and make them see that things can be achieved. I am very pleased that we have the participation of more than 400 spectators from seven public universities.”

With you here, Carranza added, we are promoting coordinated action with the Government of Mexico, by the Department of State (SRE), who’s headed Marcelo Ebrardand the government of Hidalgo, and Latin American and Caribbean Space Agency (ALCE).

on his chance, Alonso Huerta Cruz, CEO of Council for Science, Technology, and Innovation (Citnova), said that these types of activities are aimed at further promoting scientific diplomacy and leveraging talent for the benefit of Mexico and Hidalgo.

For this reason, the presence of Engineer Luis Enrique Velasco Velázquez, Head of Mechanical Design for the March 2020 mission and founder of the company in Hidalgo, is of paramount importance. Zero Gravity Space and the ambassador Gustavo Alonso Cabrera Rodriguez, SRE representative at ALCE.

As the Governor of the State of Hidalgo, Omar Fayyad Meneses, pointed out, scientific diplomacy is the best introductory message for the people of Hidalgo. For this reason, his government has implemented various projects with institutions that promote knowledge-based development” Huerta Cruz explained.

In this way, Huerta, through the Planning and Foresight unit, has provided Citnova and its relationship with the Global Mx network, which integrates the most prominent Mexicans outside the country, before talking with a working tour of various points of the state’s scientific and technological infrastructure.

Both guests visited the infrastructure that Metropolitan Polytechnic University of Hidalgo (UPMH), an educational institution that trains upcoming in-state aeronautics engineers and teachers, who have represented the entity in various parts of the world and won residencies and competitions at NASA.

During the tour, they learned about the infrastructure of The Education, Health, Science, Technology and Innovation District (DESCTI), The general coordinator, Alejandro Franco Segura, explained that major biotechnology and pharmaceutical projects are being developed in the country.

Luis Velasco and Gustavo Cabrera also got to know the Hidalgo Science and Technology Park, an area connecting young people with knowledge, the most valuable currency today.

Luis Enrique Velasco Velázquez is a Chiapas specialist in simulation, analysis, robotics, and mechanical design software for space devices such as satellites, explorer robots, and space laboratories. Promote space sector projects in Hidalgo such as the National Laboratory for Space Access (LANAE) The launch of nanosatellites was the goal of his tour.

During his presentation, Velasco Velasquez shared his experience about how he became part of NASA and the Mars mission, as he described the seven minutes he lived in horror and joy upon the successful take-off and landing of the Perseverance rover.