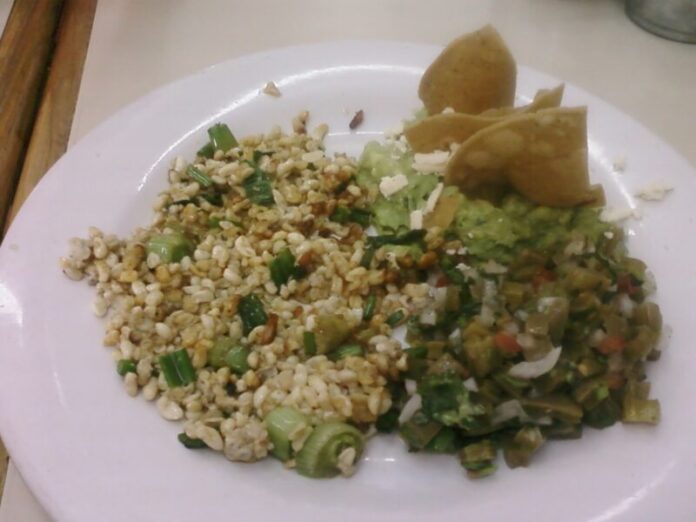 Perched on the hillsides of the Mezquital Valley in Hidalgo, Mexico, sits a family-run farm called Teotlacualli. While a variety of vegetables are grown here, this farm serves as a base for another purpose. It is built on land that is home to an abundance of wild ant nests, where escamoles are foraged.

Escamoles are an edible ant larvae of the velvety tree ant, found anywhere from central Mexico up to Washington state in the U.S. In Mexico, escamoles have been consumed since the era of the Aztecs, but the unexpected food source is receiving renewed interest as a rare delicacy—among Mexicans and visitors alike.

José Carlos Redon is the owner of Teotlacualli, where he has been farming ant eggs for over a decade, in an agricultural community called Puerto Mexico some 80 miles northeast of Mexico City. Throughout the year, escamoleros (ant egg farmers) like Redon will climb the valley’s steep hillsides to search for and monitor nests, using their farms as a home base. The act of finding colonies and tracking down the eggs is not an easy task, and the difficulty involved in foraging escamoles only adds to their reputation and appeal.

“The practice is taught across generations of farmers,” says Redon, who learned how to farm escamoles from his uncle Armando 11 years ago.

Ant nests are located under maguey plants, which farmers have to carefully move aside, scraping away any topsoil covering the nests with thin branches. They then delicately separate ants from their larvae with large sieves, and must ensure that nests are covered again by the soil and plant that they removed. Improper technique can be “like a hurricane has swept through your town,” Redon says of the colonies.

Though insects have been an integral part of historic Mexican culinary traditions, with urbanization, Mexican elites started looking down upon the practice. In recent years, though, escamoles have captured the attention of various upscale chefs in Mexico City as both a sustainable food source, and a way to reconnect with traditional culinary practices. Redon, for example, works as a supplier to Enrique Olvera of Pujol.

“Over the last five years or more, there’s been much more acceptance of insects as food,” says Louis Sorkin, an entomologist for the American Museum of Natural History and a frequent speaker in New York on entomophagy, the practice of eating bugs. Yet while insects provide a sustainable protein source at a low environmental cost, according to a UN report on global food insecurity, there is still work to be done to dispel remaining biases.

“We have to start rethinking and redefining exactly what edible insects are,” says Joseph Yoon, Executive Director at Brooklyn Bugs, an organization aimed at raising awareness for edible insects. “We need to come up with ways to change consumer perceptions.”

Chefs like Olvera are trying to do just that, reinventing traditional insects as delicacies. One of Pujol’s most iconic tasting menu dishes is smoked baby corn covered with a sauce made out of ants. His menu has also featured escamoles on tostadas with crispy chicken skin.

Escamoles don’t need to be reserved for high-end tasting menus though. Redon prepares them simply in his own kitchen and for guests of the farm, where he gives tours and cooking classes. (Foraging experiences are offered during the collection season of February to April.) He will fry around 100 grams of escamoles per person—enough for two full tacos each. Ant larvae cannot be served in huge quantities “because they can contain up to 74 percent protein,” he says.

Chef Olvera eats them at home, too, where he often prepares them simply, using a traditional local Hidalgo recipe. “I like to cook escamoles with just some butter and herbs,” he says. “Once they are cooked, I put them on a fresh-made tortilla with just some green salsa.” When raw, they resemble a pine nut, but with heat the escamoles change in texture, forming delicate clusters resembling cottage cheese that deliver a pungent, earthy flavor.

In addition to Redon’s farm and Olvera’s Pujol, curious diners can also sample escamoles on the menus of restaurants such as Quintonil, Emilia, and Salon Rios in Mexico City, and Scamol in Morelia. Note that guests are encouraged to arrive on an empty stomach—the larvae are incredibly filling, and nothing can go to waste. Escamoles are a delicacy, after all, and a labor-intensive one at that.