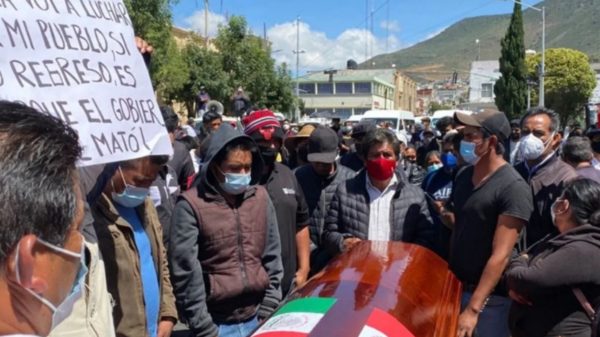 Leobardo Hernández Regino, 29 years old, and a resident of the community of Xuchitlán in the municipality of San Salvador in Hidalgo, died on the afternoon of June 15 at the General Hospital of Pachuca.

The deceased today received medical attention by personnel from the entity’s Ministry of Health due to a blunt injury to the skull and the upper part of the facial massif that occurred on June 1 during a demonstration at the Government Palace.

The man received a tear gas canister directly on the head, and the injury required emergency surgery, in order to contain the hemorrhagic alteration concomitant to the trauma.

During the first surgery, injury to the bones of both orbits was found, as well as localized hemorrhage towards the portion of the brain. The presence of cerebral edema was also evident and associated with the trauma itself, the SSH reported.

According to the authorities, the patient came out of this first procedure once the previously described problems were resolved.

He was admitted to the Intensive Therapy area, in order to reduce the neurological symptoms associated with cerebral edema, where he remained stable, so it was decided to intervene in a second stage, in order to proceed with the reconstruction of the orbital regions. and part of the facial massif.

Leobardo’s parents held a press conference outside the General Hospital to show their dissatisfaction with the refusal to see him during the first days after he was admitted, in addition to the fact that they have not been given access to the clinical file.

Given this, the government said that the director of the General Hospital of Pachuca provided medical reports to the parents of the now deceased, every 12 hours.

And now that the victim has passed away, the family members cry out for justice and for the person responsible for this homicide to be punished.