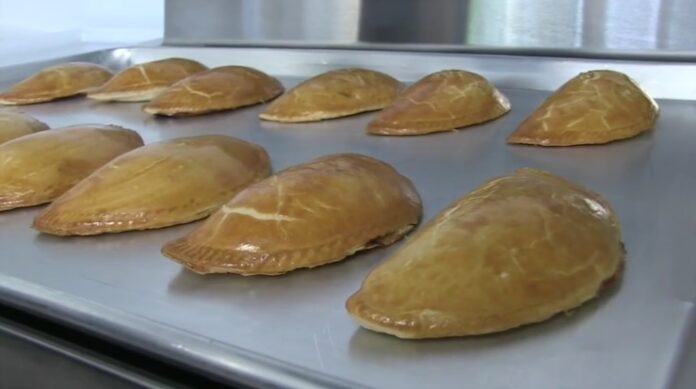 There is a tiny shop in the city of Chicago, near Humboldt Park where they’re making a specialty from the state of Hidalgo in Mexico – the paste (PAH-stay). Not to be confused with the pasty (PAST-ee) from Michigan’s Upper Peninsula – however, they are related, thanks to the English miners who settled in Pachuca, Hidalgo, Mexico back in the 1800s.

They sure look like empanadas, but pastes, like the ones made at Café Pachuca in Humboldt Park, come from a long line of family recipes that have been handed down over the years. There’s a reason they resemble the Cornish pasty, which made its way to Michigan’s Upper Peninsula thanks to the miners who moved there. The Mexican story is much the same.

“After the Mexican Independence War, the gold and silver mines that were located there were all ruined,” said co-owner Melissa Luna. “An English company bought them out and they sent over their miners, from Cornwall, England. Their wives would make them what’s called a “pasty,” and they converted them to the Spanish name, calling them “pastes.”
And so Hidalgo, Mexico, is where the paste is king.

“The recipe is from my father’s family, from four generations back.”

The dough recipe is a closely guarded secret – slightly flaky, a bit rich, but also tender. An egg wash just before baking gives them a luminescent sheen. Besides strong coffee, they also make a cucumber water to go along with them. Luna’s family helps out with both the pastry shell and the fillings.

“The traditional filling, which is from England, is the beef and potatoes.”

But since these miners lived in Mexico, indigenous ingredients and recipes greatly influenced what was stuffed inside before baking.

“Chorizo and potatoes, the chicken tinga; we also have a fun one called a Hawaiian with ham, cheese and pineapple, and we also have black bean for the non-meat eaters,” she said.

Even though they only have a handful of flavors right now, the goal at Café Pachuca is to double that in the next couple of months to continue to represent those flavors from Mexico.

And Steve says there are plenty of other options for finding great empanadas in the city.