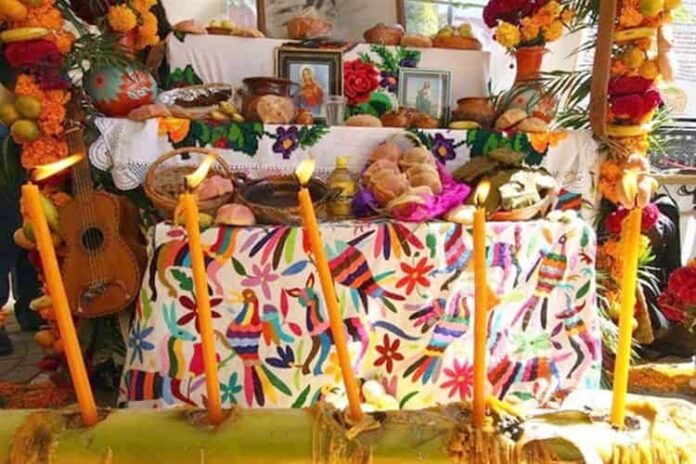 Xantolo is a word used by the indigenous communities of Mexico’s central states to refer to celebrations dedicated to the deceased and the traditional Day of the Dead festivities.

PACHUCA, HIDALGO.- During the Xantolo celebrations in Mexico various offerings are made for the souls of the faithful departed to visit Mexican houses; on October 18 the second offering is made, this is the day of San Lucas.

Xantolo is a Mexican tradition of pre-Hispanic origin, which is maintained in the Huasteca of Mexico, located in Veracruz, Tamaulipas, Hidalgo, and San Luis Potosí, and to a lesser extent the territory of Querétaro, Puebla, and Guanajuato.

This tradition is also known as the Day of the Dead when Mexican homes are decorated with candles, marigold flowers, colored confetti, palm arches, incense, as well as offerings of drinks, dishes, and photographs.

The third date of the commemoration of the deceased is October 18, when the day of San Lucas is celebrated.

This date is dedicated to the forgotten souls, to those who do are not remembered in the world of the living, to those who died in misfortune, with violence, assassinated, drowned, or who in life committed some serious crimes or offenses.

Likewise, the gods of Mictlán, Mictecacihuatl, and Mitlantecuhtli are asked to grant the dead permission to reach the Yoliztli (world of the living).

During the ceremony, a tamale is buried and water is given to Mother Earth, as a means of gratitude for the food she provides, in the same way, this day, bunches of bananas are cut, so that they ripen from here to the big party ´of the souls´ that takes place between October 28 to November 3.

In the Huasteca region, candles are lit and buried next to crosses, to illuminate the path of the souls that come from the underworld. In this second offering, cocoa is also ground to make chocolate, one of the favorite beverages of most of those long gone but not forgotten.