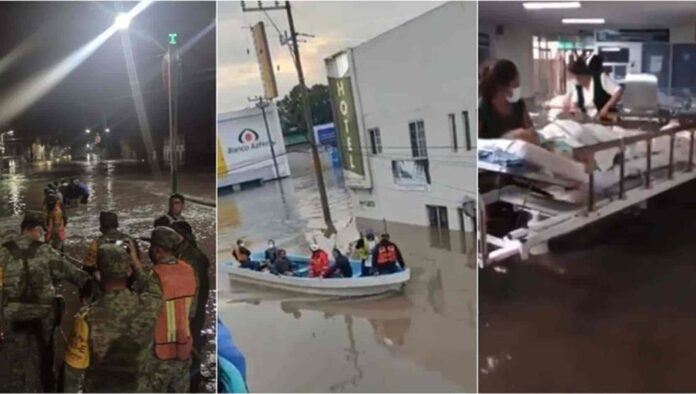 At least 17 patients at a hospital in Tula, in central Mexico, died as a result of serious floods on Monday that state authorities described as the most tragic in the last 40 years.

The Mexican Institute of Social Security (IMSS) confirmed that the heavy rains and the overflowing of nearby rivers caused the collapse of the electricity supply of much of the municipality and also of the power plant of the medical center, which prevented the supply system oxygen to patients will work.

Of 56 people hospitalized, about half were being treated for COVID-19 at the time of the incident.

“The 40 hospital beds are on the ground floor and in 20 minutes the water rose , ” said the general director of the IMSS, Zoé Robledo, from the roof of the Tula hospital.

Images shared on social media show how medical personnel, covered in knee-deep water, try to save patients by raising their stretchers to the top floor of the hospital.

In another video the rescue of a newborn is seen in his incubator, being evacuated from the roof of the hospital in a boat of the emergency teams.

On Tuesday morning, hospital workers showed in their nets how they were trapped on the roof waiting to be rescued and asked for oxygen for patients, medicine and water.

The government confirmed that after the rescue of the last 20 patients, they would proceed to the evacuation of medical personnel.

The governor of the state of Hidalgo, Omar Fayad, confirmed the death toll of 17 and reported that more than 30,000 inhabitants in Tula were affected by the floods and entire families were trapped in their homes.

“For 40 years there had not been such a tragic situation due to the rainfall” in the municipality, “he said.

Fayad published on his Twitter aerial images of Tula in which it is observed how much of the municipality is covered by the waters.

This Tuesday, President Andrés Manuel López Obrador described the situation in Tula as “serious” and announced that “Civil Protection is already acting, implementing the DN-III plan in support of the population.”

After knowing the balance of victims, the president showed his sadness for what happened. “In this honorable commission there are good, very good, bad and very bad days; today is one of the latter days,” he tweeted.

“A lot of water has fallen throughout the Valley of Mexico and it will continue to rain. Those who live in low-lying areas, for now, move to shelters or high places with family or friends,” he urged the population.

The Hidalgo authorities assured that more than a thousand elements of the National Guard will support the rescue work together with members of the Civil Protection. Collection centers and several temporary shelters have also been set up.

The heavy rains registered this Tuesday in several areas of Mexico also left at least two people dead in Ecatepec, State of Mexico, when they were swept away by the current of the waters.