A few hours after the New Year’s Eve festivities, the red alert or curfew was activated again in Culiacán, Sinaloa (west of the Pacific Ocean), where alleged organized crime groups implemented actions for residents to take shelter in their homes.

Already on Sunday, criminal cells announced to the inhabitants of the city – the bastion of the Sinaloa Cartel – that they are prohibited from shooting into the air on December 31 and January 1, whoever is caught will be picked up and “shot.”

In an audio, circulating on social networks, a male voice is heard, supposedly from Néstor Ernesto Pérez Salas, alias the “Nini”, operator of the heirs of the Sinaloa Cartel.

“I don’t want them to be in a rampage, tell their comrades, their compadres, all the friends who have to be happy, that they like to shoot, tell them to take it, they are going to get … two-three days to see what roll, I’ll have it stored there and if they continue with their rolls, what happens?

“I don’t want bullets to be shot on New Years’ or these days, I want everything calm. To all those who are shooting bullets, they are going to throw up, a hit or they are going to confiscate the weapon “, allegedly says” Nini “.

Last July, the report Observations on Human Rights Violations Committed During the COVID-19 Health Contingencyrevealed that the Sinaloa Cartel implemented a curfew in Culiacán from April 12 to 18, while a criminal group – without specifying the name— did it in Los Mochis from April 19 to 25.

The heirs of “Chapo” Guzmán, famous for their brutality, including the beheadings and interrogations of their victims, also  have a history of trying to gain adherents, in the impoverished populations in which they operate.

On September 1, through social networks, a recording went viral where a group of men is observed, on top of a white truck, delivering food and drinks to people outside a hospital.

Presumably these are men who work for Los Chapitos.

“El Chapo and El Chaparrito’s son. There we are for ‘whatever is offered! ”,  One of the men in the truck responds.

– “Name boys, you are going to heaven” , exclaim the people who received the packages.

The video does not have more information on when or where it was recorded, but according to information from the local press, it would have been outside a hospital in Culiacán, Sinaloa.

At the beginning of the coronavirus pandemic, videos of the alleged delivery of pantries from the Sinaloa Cartel in  Culiacán began to circulate in the country. 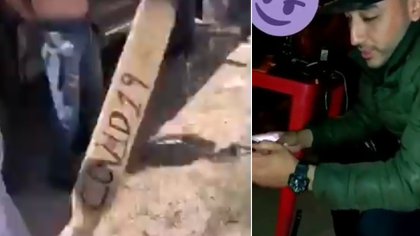 By alleged orders from the Chapitos, gunmen threatened to punish people who are on the street (Photo: Screenshot)

That city, a key node for drug trafficking between Mexico and the United States, has experienced increased tension since the beginning of the year.

Sinaloa is one of the states most corroded by drug trafficking. The Sinaloa Cartel, one of the most powerful criminal organizations in the country, has managed to silence civil society and corrupt public powers.

During the worst years of the war against drugs, launched by then-President Felipe Calderón (2006-2012), the northern region of the country was frequently the scene of photos of men having their throats cut on the sidewalks.